Why test with the DDP?

The Doberman Diversity Project is NOT just another DNA or Diversity Test.
IT'S MUCH MORE.

It's important to Study Diversity and Genetic Disease.

Genetic Diversity testing is just a small portion of the Doberman Diversity Project. Why?

Experts tell us that while important for the Doberman breed as a whole, they do not expect breeding for diversity to address diseases like DCM and cancer in individual dogs. That's why the non-profit Doberman Diversity Project has adopted a comprehensive approach. And that's why, while we're digging into genetic diversity, we're testing every dog for a wide variety of disease-associated genetic mutations for common Doberman diseases. The powerful genetic data we collect from your dog (and the hundreds of dogs tested) will power an unprecedented 1,000 dog Doberman-only GWAS (genome-wide association study) focused on genetic health and longevity.

For just $135, you'll get Embark Veterinary's Breeder's DNA Kit which means you'll get all of the results listed below in one convenient online location. You'll not only be a hero to our breed when you test your dog through the DDP, you'll also get results for:

First, COI is short for Coefficient of Inbreeding. It measures how inbred your dog is. You may have heard non-scientists claim that a dog's COI doesn't matter or is inaccurate. While pedigree-based COIs can be very inaccurate, testing with the DDP means you'll be among the first to learn your dog's Genetic COI. This important new measure, based on your dog's DNA, may well become a game-changer. Recent research found an inverse correlation between Genetic COI and Longevity. In a large study of Golden Retrievers, researchers found that for each 1% the COI rises, there is a corresponding one month loss of longevity. But, that's no surprise -- Geneticists have been warning for decades that as a dog breed becomes increasingly inbred, genetic disease will increase and the breed's overall fitness and health will decline. And the Genetic COI is a measurement of how inbred a dog is. We're working to validate the results in this recent study to Dobermans. But knowing that compared to a 1% COI dog, a 58% COI dog is statistically likely to die a fully 57 months (four years and nine months) earlier, has made us pay attention. and we want breeders to have this important information.

When you test through the DDP, you'll not only learn how inbred your dog is. You'll also know where your dog is inbred. After analyzing each of your dog's chromosomes, an Inbreeding Karyogram (map) is created for your dog. In the karyogram (below), BLUE represents homozygosity (inbreeding). YELLOW represents heterozygosity (outbreeding). So you'll learn not just how inbred your dog is, but where that homozygosity is located. Why does that matter? Because some breeders are working to avoid homozygosity in specific areas on specific chromosomes believed to be associated with genetic disease. Keeping homozygosity at bay also means halting diseases caused by recessive mutations. TIP: Test results include a free report, made for your veterinarian, that is also a handy "cheat sheet" for which disease-associated mutations are located on which chromosomes. Here is what a dog's Inbreeding Karyogram (map) looks like: 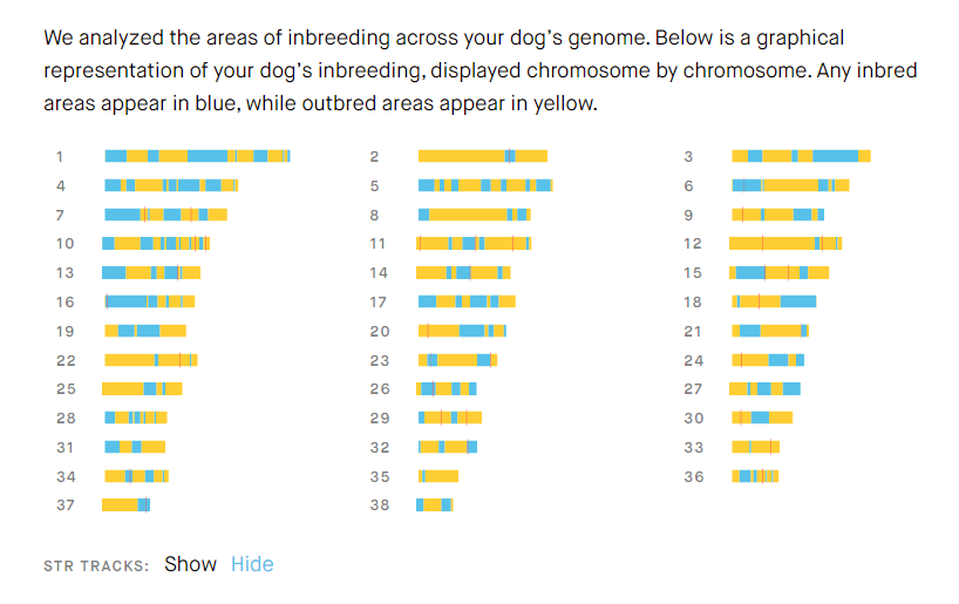 Free Virtual MatchMaker Tool and Access to Database of over 850 Dobermans.
Relatedness by Chromosome for Every Potential Mating.

When you test through the DDP, you'll enjoy free access to a virtual MatchMaker tool created by scientists from one of the world's most respected college of veterinary medicine. This tool will let you see, before mating, the different possible Litter Genetic COIs. This is priceless information for breeders who understand the genetic risks of high COIs (inbreeding). When trying to decide between a few final prospective mates that meet a breeder's criteria, this new Genetic Litter COI is extraordinarily valuable information to incorporate into breeding decisions. It gives today's breeders unprecedented control over the inbreeding levels of the litters they create. Because we have the genomic information of both potential mates, we can create a chromosome-by-chromosome map (karyogram) that details the expected inbreeding of each litter (for each potential mating combination). You can see how inbred a litter will be and where that inbreeding will be located. Here is what the Relatedness by Chromosome map looks like for one potential mating of a DDP-tested dog. NOTE: In every litter, each puppy will inherit slightly differing genetics -- less so as dogs are increasingly homozygous. Where both parents carry the same genetics (e.g., homozygous for a specific trait or mutation), all puppies will receive the same genetic contribution from mom and dad, making the karyogram red in that location. 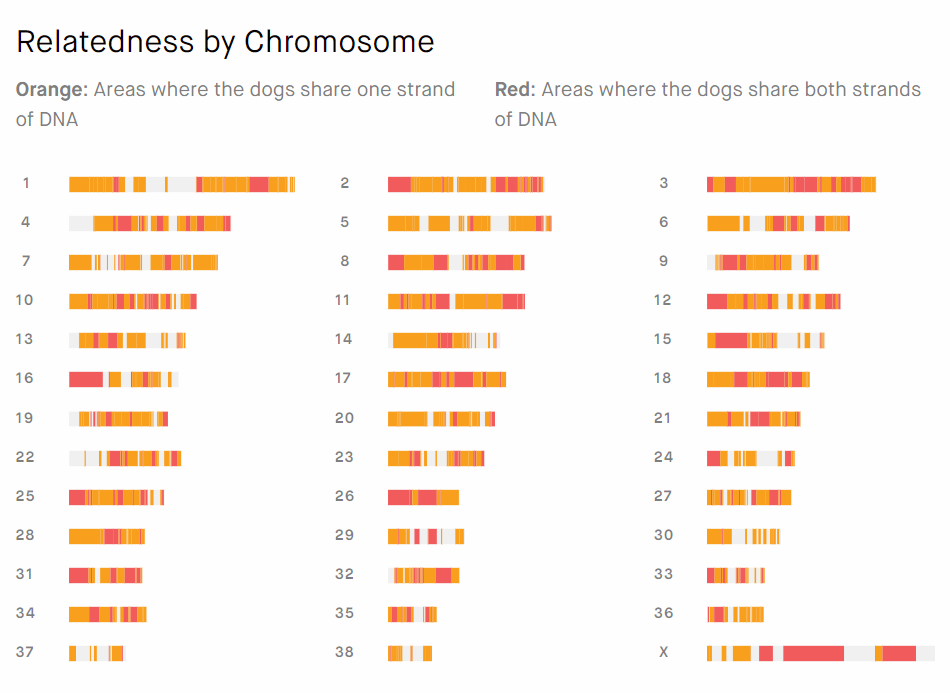 The image below shows the wide variety of litter Genetic COIs using a single bitch (female) with a very high 49% Genetic COI. Each dot represents the litter Genetic COI of each potential mate in the database (when in the breeding tool, can hover/click on each dot to learn more about each potential mate). This image shows how even high COI dogs can create litters with a much lower genetic COI. And because higher COIs correlate with reduced longevity, that matters. A lot.

​And there's more. Much more.

Testing with the DDP supports Doberman health research.
When you test your dog through the Doberman Diversity Project, you support research into Doberman health.
The DDP is a part of the most extensive Doberman-only GWAS (Genome Wide Association Study) to date.
This GWAS will study 1,000 DDP-tested Dobermans from across the world to search for genes associated with the diseases that end Doberman lives too early, too often. By testing with the DDP, you help make this happen.

Testing with the DDP supports research into the Pros and Cons of breeding for genetic diversity.
Our partner geneticists understand that breeding for diversity is unlikely to combat premature deaths due to DCM, cancer and other genetic diseases in individual dogs. And since the goal is longer lived, healthier Dobermans, we're digging into what will make a difference. At the same time, we're studying diversity to understand how it is or is not associated with health and longevity in Dobermans. If you have tested your dog with the University of California Davis' VGL all-breed diversity project, we want your results so we can use them in our research. This is about science. We're looking at the real-world impacts of breeding for diversity:
Will puppies bred for diversity enjoy longer, healthier lives?
Will these litters suffer from higher rates of genetic disease and die even earlier?
Or will there be no measurable difference?
Finding out is a key reason the DDP was founded (thus the name).

Testing with the DDP includes a specially created report for your Veterinarian.
You can share this report with your veterinarian with a simple click from within your dog's online Genetic Report.

Testing with the DDP comes with FREE access to online breeding tools.
You'll gain access to a powerful virtual breeding tool you'll gain access to, at no extra cost.
The Virtual Breeding tool is helping breeders make breeding decisions that take DNA results into consideration.
For each potential mating combination, you will know the litter's Genetic COI -- before mating.
We're about Global Cooperation with Doberman Researchers.
Testing with the DDP means the DNA data we collect is openly shareable.
We aren't keeping any secrets. If you want to share your dog's raw high-definition DNA data with research projects from across the world, you can do so with a simple click within your dog's online DNA report.

Testing with the DDP is shareable with others in the Doberman world.
Want to share your report with a friend or another breeder? Maybe you want to share only SOME of your report?
Easy -- you choose what to share from inside your dog's online DNA report. You're in control, yet sharing is simple.

We are a non-profit.
100% of our revenue goes to support our scientific goals.
Our Professional Team is 100% Volunteer
Test Your Dog Now
​Stay up-to-date. Follow us on Facebook!