The Doberman Diversity Project is a non-profit global Citizen-Science effort created to support scientific research into Doberman genetic health and longevity by building a comprehensive digital DNA repository that includes health documentation of tested dogs, ​accessible at no cost to researchers across the globe. 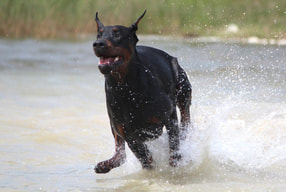 ​It's MUCH MORE than just another Genetic Diversity or Disease Test.
​We're all about supporting Research.

​Because the DDP believes that the best approach to breeding is a comprehensive one. It's not just about DNA disease testing, genetic diversity, Genetic COI, ancestors, conformation, or temperament. It's about ALL of these things in the hands of knowledgeable and transparent Breeders.

​The karyogram below illustrates a DDP-tested dog's chromosomes, showing the level of inbreeding (homozygosity) of that dog, as well as where those areas of inbreeding are located. This complex data is incorporated into the breeding tool to help breeders minimize and even reduce Litter COIs -- an important goal in light of the demonstrated correlation between higher COIs and decreased longevity in dogs.

And there's more. Much more.